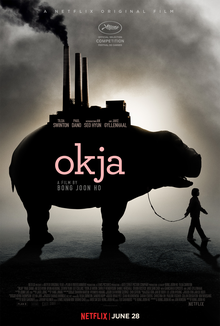 A soulless multinational company develops a giant pig which poops less and eats less than regular pigs while providing a greater volume of meat. The company sends a number of these super pigs to farmers all over the world to raise for ten years. One of them is sent to South Korea where the farmer’s daughter befriends the pig and when, inevitably, the pig is taken back to New York the girl is devastated and sets off on a rescue mission.

I really enjoyed it. It was funny in parts but also sad. The ALF (Animal Liberation Front) have a prominent role in several action scenes and they are all very well done. I don’t know all that much about the ALF in real life but in the film they were depicted as organised and well-resourced but slightly nuts. There was also some lovely scenery at the beginning of the film which was set in South Korea. It was directed by a South Korean writer/director, Joon-ho Bong.

Would it make a meat-eater question whether to eat bacon for breakfast? I don’t know. It has been so long since I ate bacon that I find the thought repulsive so I’m not the right person to ask. But I do think the film will challenge perceptions of factory farming and how we treat animals today. Towards the end of the film I was reminded of a quote by Nobel Prize winner, Isaac Bashevis Singer:

In relation to them, all people are Nazis; for the animals it is an eternal Treblinka.

But there is reason to hope. We may see lab-grown meat available in stores as early as next year.