People like to complain about cyclists: “They don’t obey the law,” “They run red lights,” etc. I’ve seen cyclists go through red lights before but I don’t object when they do it. Why not? I’ll try to explain using a situation I found myself in today. I was on my bike with kids inside at an intersection similar to the one below but minus the cycle paths: 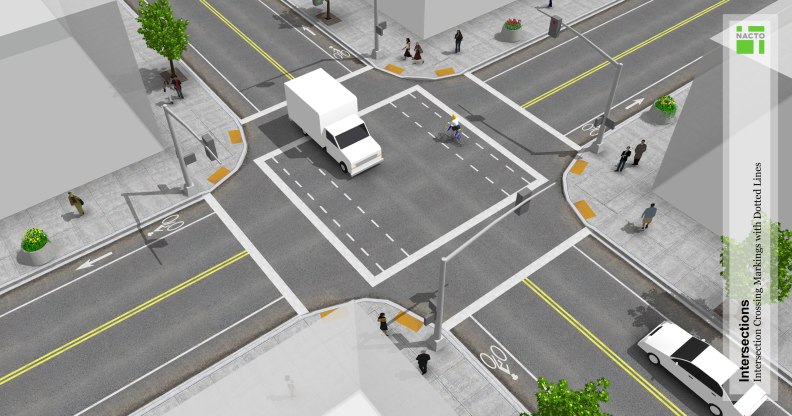 I wanted to turn right but there was a long flow of traffic coming from the opposite direction and I had to give way (we drive on the left side of the road here). However I couldn’t wait in the middle of the intersection because it wasn’t exactly square like this one; the traffic going straight through was slightly to my left and it would have been too dangerous for a bike to sit out in the very middle of a busy intersection. So I was stopped behind the line but on the right side of my lane waiting to turn right.

At one point the pedestrian crossing went green and all traffic was stopped so pedestrians could go diagonally across the intersection. This would have been the best time for me to cross, however I know how riled up people get when cyclists go through red lights and so I didn’t do it. Instead I had to wait until my own light went from green to orange and try to get across as quickly as possible before it changed to red. This is because the stream of traffic coming from straight ahead was non-stop until the lights changed. But I’m so slow – I’m on a cargo bike with an 80kg load not including my own weight – that I can’t dash across the intersection very quickly and so my light went from orange to red before I made it through and then the next cycle of traffic coming from my left and right started again which put me in a terrible situation. Does this make sense?

With the exception of those in the Netherlands and Denmark, most roads around the world are designed for motor vehicles. I don’t think it could possibly be any harder for cyclists than it is currently. Cyclists take up less room on the road, we don’t emit any greenhouse gas emissions, we cost the national health service less, we don’t produce pollution, and yet our town planners have for decades and decades gone out of their way to make life as hard as possible for us. As thanks for this we get abuse from people for trying to avoid getting hit by a bus by running a red light. Next time you see a cyclist run a red light, instead of abusing them, thank them for doing their bit to keep the air you breathe cleaner.

Does this sound like a bit of a rant? It’s because it is. We cycled from the city to the beach today. This should be a lovely cycle route because the beach is touristy and it makes sense to connect one touristy part to another. They’re also very close and walkable. However it was really stressful. I was surrounded by buses at one point and although the bus drivers were all really considerate, what if they hadn’t seen me? I’m not worried about a bus ramming me from behind like the truck in Terminator 2, I’m worried about the bus driver who doesn’t see me. And there were roundabouts which are terrible places for cyclists and intersections like the one above with not a single bike lane in sight. Sometimes I think the city councillors want us all to go out and buy several cars each because that’s who they’re catering for.

On a different topic I’m loving my Nuu Muu dress and wear it practically every day now. It’s probably getting a bit stinky but the fabric is almost like a pair of bathers and doesn’t show any sweat and dries really quickly. Elizabeth has one, too. Here we are, with me feeling and looking a bit knackered after our bike ride: 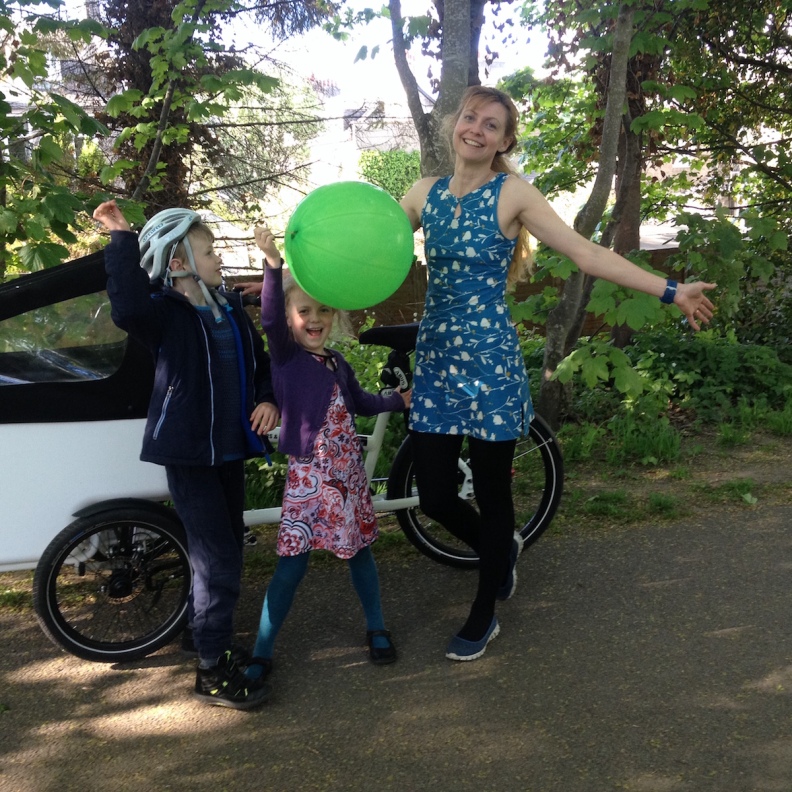 14 Replies to “Should cyclists be allowed to run red lights?”