We’re in Braemar for the weekend but were unable to get any accommodation because the Braemar Gathering is on and so we decided to book a 1974 VW campervan and take our own accommodation. 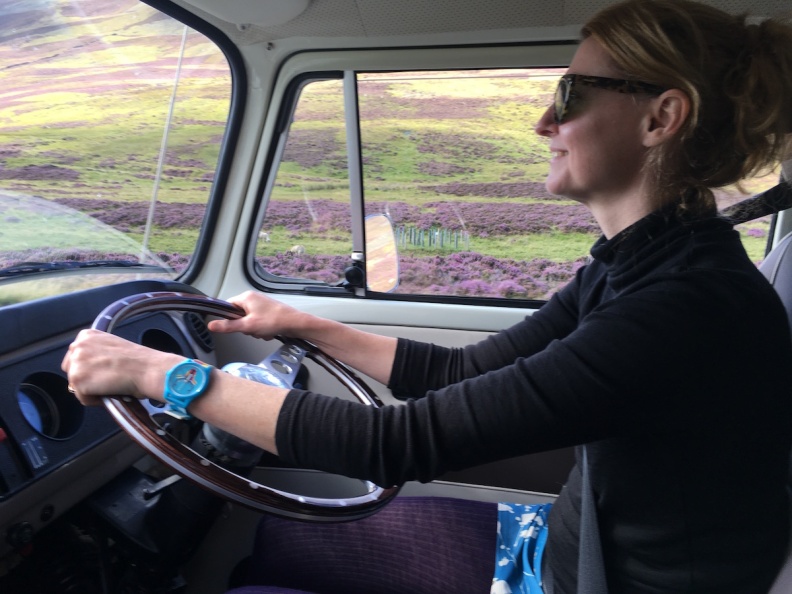 It has been a bit of a disaster so far. I had a lot of problems shifting gears. I learnt to drive a manual and my first car was a manual and some of the car club cars are manuals but nevertheless, I’m finding the 1974 VW very tricky. Several times I’ve been stopped in the middle of the road unable to get it into first to start again and then I start to panic. The car has a top speed of 45 miles/hour but I’ve barely gone above 35 miles/hour.

I slept poorly last night. We couldn’t get the heating to work and I spent most of the night worrying that the children would freeze to death. When I wasn’t worrying about that I was worried about how I would drive the thing home again. The walk to the toilet is about 200m which doesn’t seem like much but it is when you have two small children needing to go several times before bed and then again at 6am in the morning … and it’s freezing. Add to that we keep banging our heads on the roof. Obviously I’m a princess now and should stick to glamping going forward.

It hasn’t been all bad. We went up the chair lift at Glenshee yesterday and for a walk along the ridge. The views are magnificent. I told Elizabeth that we’re on top of the world and the little know-it-all said, “No, we’re not, Mount Everest is the top of the world”.