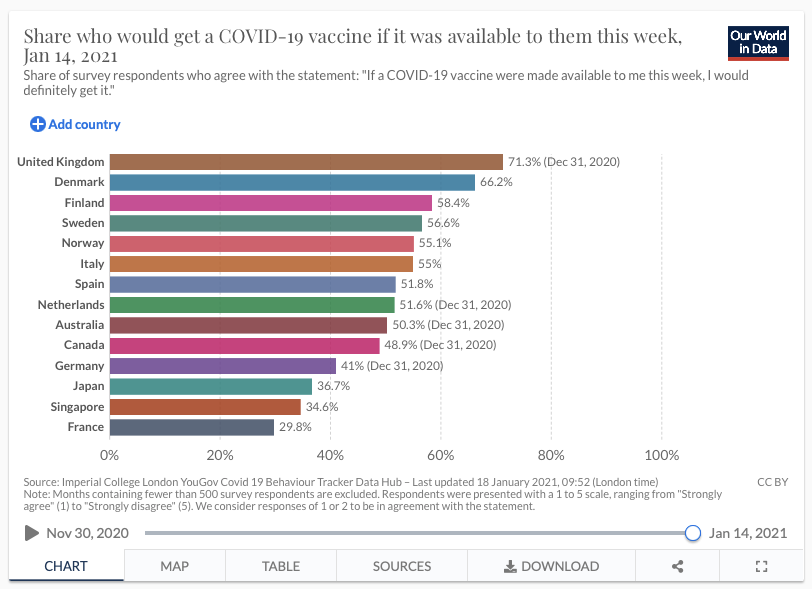 People aged 40-49 are to be prioritised for the vaccine in the next phase which means I could be offered my jab anytime from mid-April onwards. This is great news and much earlier than I was expecting.

The UK has now given 27% of the population at least one dose.

The UK has made a lot of mistakes in the pandemic but it’s looking more and more like the decision to delay the second dose and therefore give a larger proportion of the population at least one dose is paying off. Data in Scotland released this week shows that one dose of the Pfizer vaccine reduces the risk of hospitalisation by 85% while one dose of the AstraZeneca vaccine reduces the risk of hospitalisation by 94%. This result is also strong when analysed for over 80s with a combined vaccine effect of 81% reduction in hospitalisation. This also seems to confirm that the AstraZeneca vaccine works in older age groups which is great news.

Some people may wonder why the AstraZeneca vaccine reduces the risk of hospitalisation by more than the Pfizer vaccine given the Pfizer vaccine has a higher efficacy. Efficacy is a measure of whether the vaccine prevents infection but doesn’t say anything about what happens if you do get sick. The AstraZeneca vaccine has a lower efficacy but in trials was 100% effective at preventing severe disease and in the Scottish data at least, is better at reducing hospitalisation after one dose.

Preventing severe disease and hospitalisation is key to getting us out of this mess. Many people have become dismissive of the AstraZeneca vaccine because of much lower efficacy against the South African variant, known as B.1.351. But it’s likely to be just as good at preventing severe disease because of the body’s T-cell response. So while it may not reduce the number of cases of infection overall it will prevent severe disease, hospitalisation, and death. It’s therefore wrong to say the vaccine doesn’t work.

This is the image in a larger version. The last bullet point is the crucial point. It says the T-cell response that recognises the South African variant is likely to be present in individuals who have had the AstraZeneca vaccine.

I was both surprised and impressed when I saw this graph on Our World in Data. It has the UK at the top of the list for vaccine acceptance. Perhaps it’s because we’ve been hit so hard by the pandemic or perhaps the British are just a sensible bunch of people but whatever the reason, the country that created the “vaccines cause autism myth” which fuelled a global anti-vaccine conspiracy movement is now the population most likely to want to get a vaccine.

5 Replies to “I’m next for the jab, AstraZeneca vaccine cuts hospitalisation risk by 94%, and the South African variant”