We’re all very healthy and haven’t had much need for the NHS since we moved here but the school asked us at the end of last year to organise an appointment for Daniel to discuss his autism and Tourette’s syndrome. It was something I’d been thinking about doing at some point but hadn’t got around to it. He used to see a paediatrician in Auckland once a year but if I’m being honest we never got much out of those appointments and so I felt it was all a bit of a waste of time and didn’t see the point.

However they seem much better geared up for ASD in the school here and so I wondered whether we might get more out of an appointment with a specialist here too. So I took Daniel to the GP last month – his first ever visit to a GP in the UK – and the GP referred him to a specialist and we got an appointment for the 25th February which is today. It took us 6 months to get an appointment with the specialist in New Zealand when he first got a referral so we were very impressed that we only had to wait one month in the UK.

This morning we made our way to the Royal Children’s Hospital by bicycle so as not use up any hospital car parks. It only took 20 minutes and if I’m being honest, it was a dreadful ride with lots of traffic and no-where for slow bicycles. But we made it there alive and got a park just outside the front door: 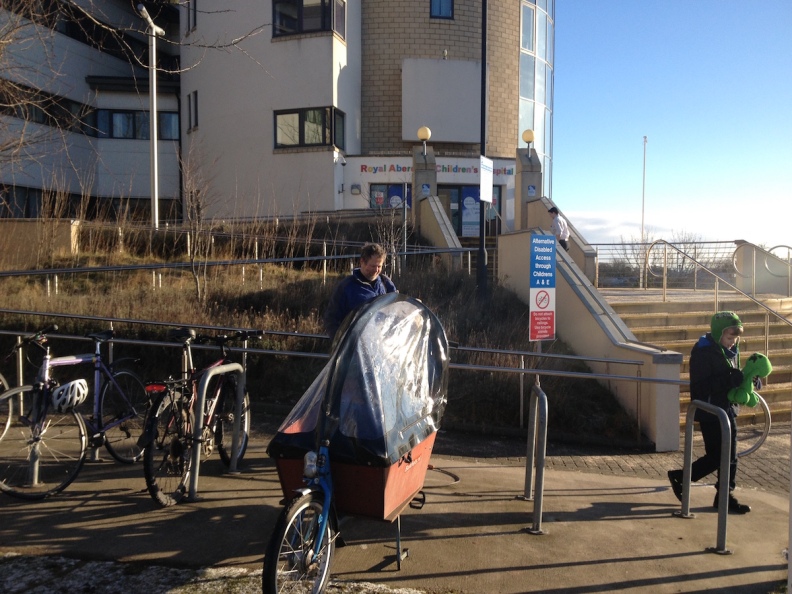 We were there for about an hour and it was terrific. The doctor is going to refer Daniel to an occupational therapist to help with his coordination and fine motor skills. This is something I have always wanted for him. She is also going to write a report for the school with strategies for dealing with his anxiety in the playground. The school is already doing quite a bit in this regard and have started a lunch time scratch club just for him and 10 other kids one day per week. They’ve also enlisted the help of the school psychologist. I think it’s amazing that the school even has a psychologist. We’ve also been given given a tonne of resources for families with kids on the spectrum and with Tourette’s syndrome. I am really impressed with the level of support kids with special needs get in the UK through the NHS. It’s a national treasure.

It’s hard to compare just one school in Auckland with one school in Scotland but Daniel did not qualify for any extra assistance in New Zealand at all and this was not specific to the school he went to. Here he gets lots of extra support in the form of one-on-one teacher support time, the school psychologist, and there’s even a school doctor. The school really goes out of its way to help kids with special needs. Compare this to what has happened to a colleague of Ben’s at the University of Auckland. He and his family moved to New Zealand in 2011 with their two children but their application for residency was denied because their son is autistic. They’re returning to Belgium this year.

20 Replies to “Praise for the NHS”