I’ve had the very great pleasure of testing a Tern GSD – an electric cargo bike – for a couple of days. I picked it up from Edinburgh Bicycle Cooperative on Thursday evening and then flew home like I’ve never done before. Indeed on the way home I cycled up to some traffic lights where I waited behind another cyclist – a sporty-looking fellow who, under normal circumstances, would have me eating his dust. But when the lights went green I flew past and never saw him again.

Electric bikes make you feel like a superhero, a bit like Deathlok from Marvel’s Shield. Technology turned Deathlok into an enhanced human with special powers and in that same way an electric bike makes you like you have super powers on the roads.

I’ve ridden a few cargo bikes now – a Bakfiets, my Cargo Bike Company electric cargo trike, and the Butchers and Bicycles trike. The Tern is a fast bike. It’s like the sports car of electric cargo bikes while my electric trike is the family station wagon. Both have their uses. I found myself zipping around corners on the Tern in a way I cannot on my own electric trike because a trike can tip if you take a corner too fast.

The Tern I can lift completely off the ground which means I can take it up stairs. It’s still heavy but this can be helpful because there are invariably times when you’ll come across stairs on a bike. My cargo trike is impossible to lift unless I have another person to help me.

On Friday we did the school run on the Tern. Kids get street cred when they arrive at school by cargo bike. The cushion seat on the back is super comfortable. I sat on it while I was waiting for the kids to come out at school and it was the best seat in the playground. The kids raved about it too.

The Tern is much easier for the kids to jump on and off. With my cargo trike there’s a bit of faffing around at the start and end of every trip – lifting the hood, kids climbing out etc – but on the Tern they just leap on and off.

The stand is very stable, stable enough for me to sit on the seat on the back when waiting. I can also release the stand when kids are already on the bike and ready to go which is important, especially if you have really young kids that need strapping into a bike seat.

The real test came on a very steep hill that my current electric trike can’t make it up when fully laden. It’s a hill on the way to Highland Dance and every Saturday we leave the bike at the bottom and walk up since Highland Dance is just around the corner from the top. But on the Tern we made it to the top without any trouble. I had it on the highest setting thinking we may have to walk but we did it and I barely lifted my heart rate. Being small and manoeuvrable, the Tern was able to go everywhere.

The electric assist has five settings: off, eco, tour, sport, and turbo. I kept it mostly in eco and just used the higher settings for steeper hills. On the flat I turned it off and pedalling was smooth and easy.

The tyres are thick and smaller in diameter than average. This, along with the folding handlebars, makes it easier to store.

The seat has a very easy-to-adjust clip to raise or lower it. 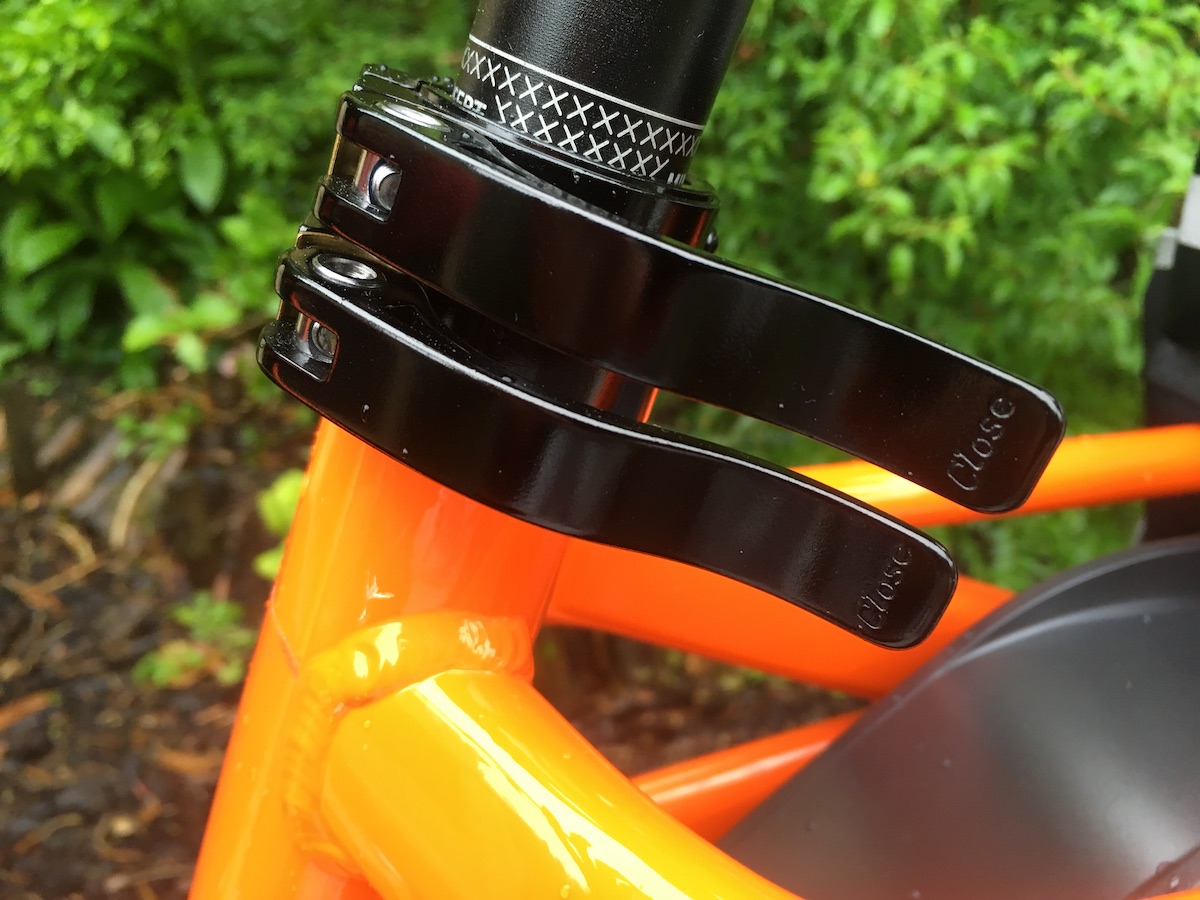 My bakfiets has this too and it’s just the best because it means it doesn’t require special tools to adjust the seat height. That’s particularly useful when more than one person will be riding the bike as can often happen with family cargo bikes since both parents may use it at different times.

The centre of gravity on the Tern is low which makes balancing easier. You might wonder how it feels with a heavy load on the back and you definitely notice it but the low centre of gravity makes it easy. My kids have a combined weight of about 70kg.

One downside of the Tern when compared with my cargo trike is the kids are exposed to the weather. Maybe my kids are spoilt but they’re used to sitting under the rain hood which protects them from rain, snow, sleet, and Artic winds. I get wet but it doesn’t matter so much for me because I get hot from the pedalling. When you’re just sitting doing nothing you can start to feel really cold.

Today it rained all day and they were initially not happy about forgoing the dry compartment inside the trike for the exposed seat on the Tern. However I rugged them up in waterproof clothing and they happily chatted the whole way about coding in Python. There’s no such thing as bad weather. Only bad clothing.

The Tern has a Bosch electric motor with space for two batteries and this apparently gives it a range of over 250km. 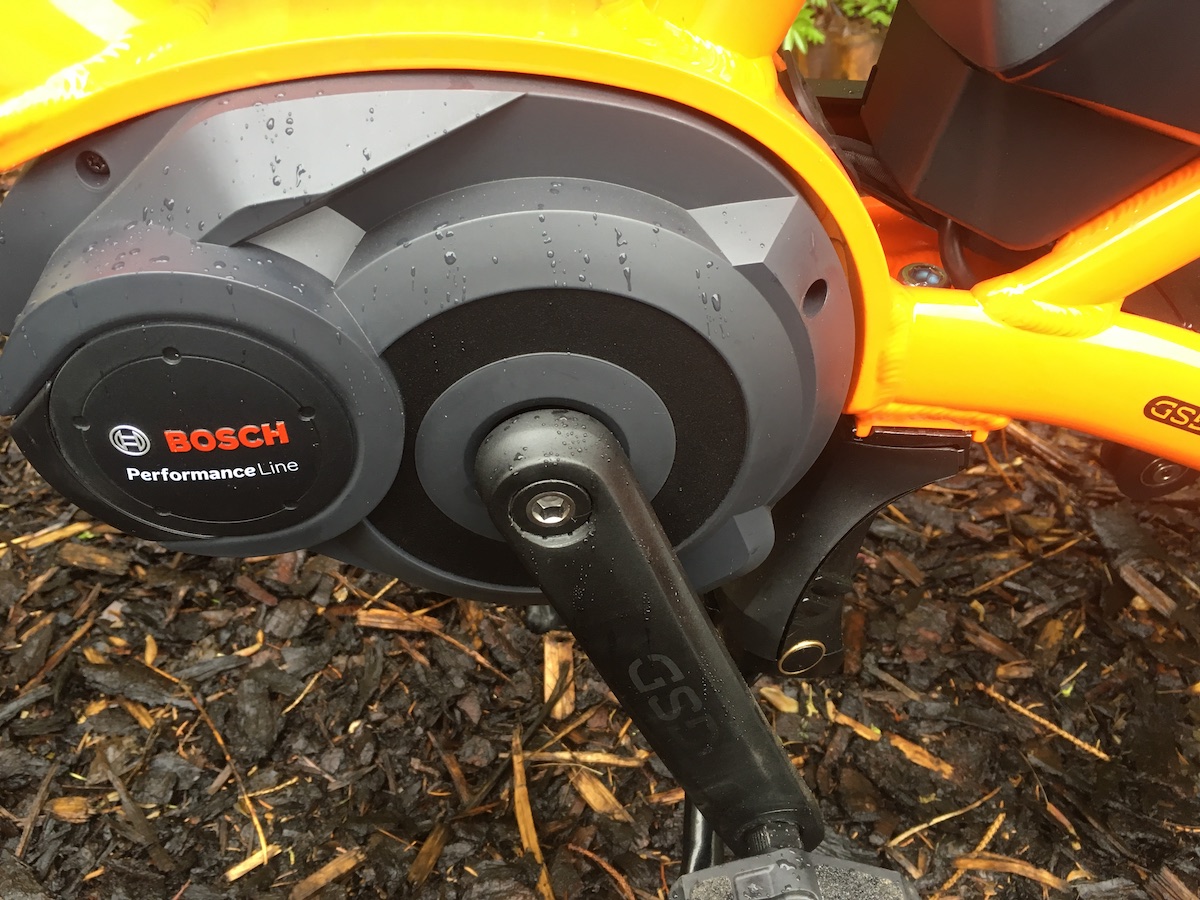 In addition to the large box on the front there are two enormous  panniers on the rear. We fit quite a bit of shopping in these along with Elizabeth’s Highland Dance swords which you can see sticking out the back in this next photo.

The only negative is that when the panniers are full the kids’ legs stick out a bit. 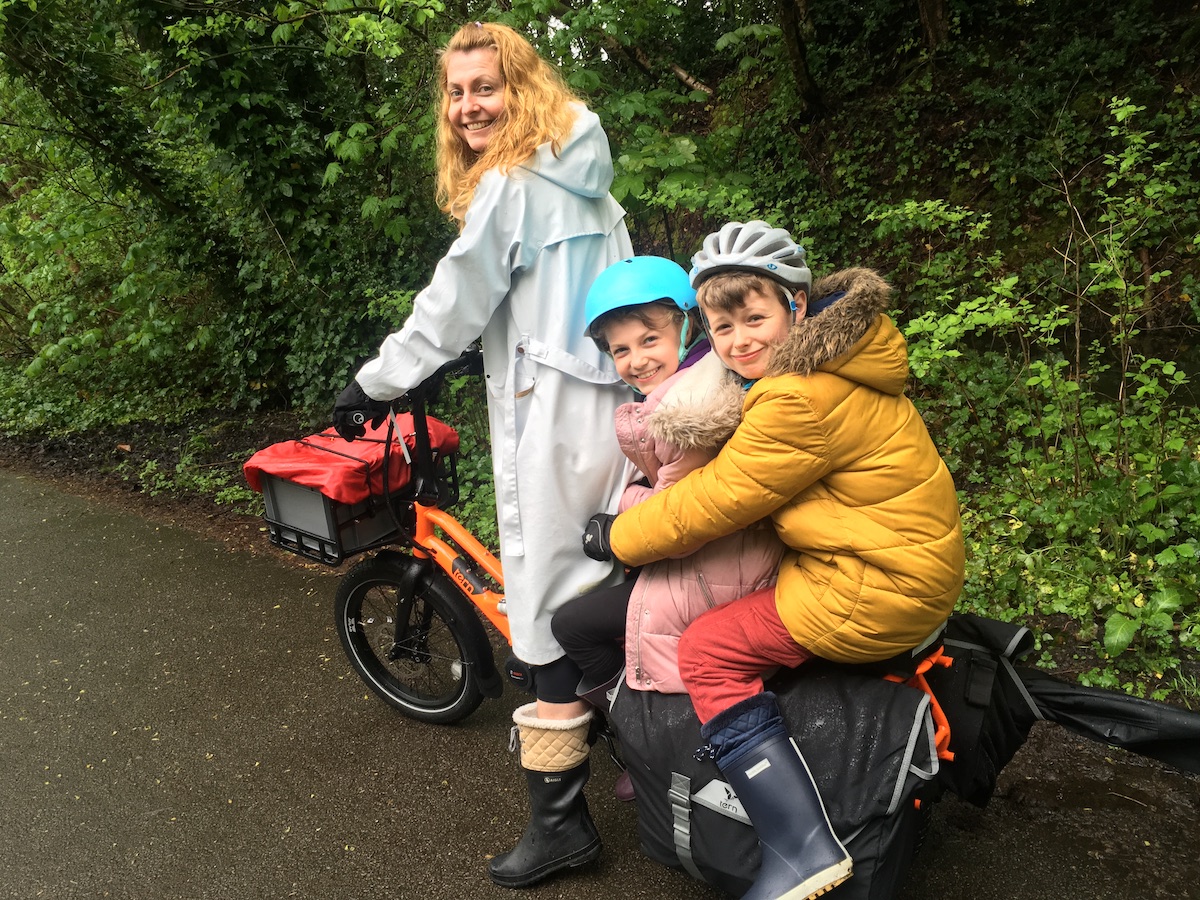 The gears are Shimano Deore and they were very smooth and easy to use. They have a very low setting which is particularly helpful with a heavy load on hills. 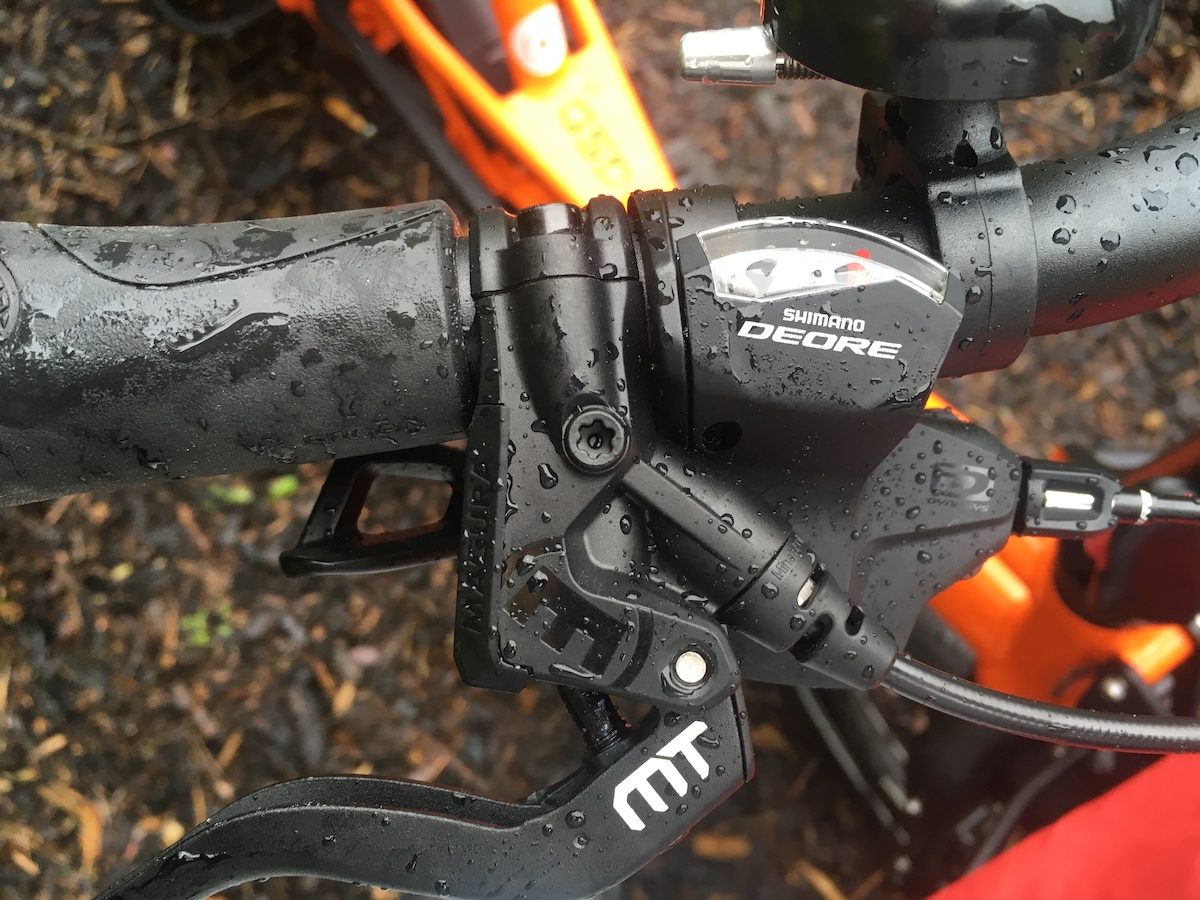 There’s also a throttle which will propel the bike when you’re not pedalling. This is useful when walking beside it or if you’re taking off from stationary and need a bit of help overcoming that initial inertia.

We loved the Tern GSD. I only wish we could have kept it. It has a pretty hefty price tag of £4,000 but the Scottish government is offering interest-free loans of up to £3,000 to help people purchase an electric cargo bike.