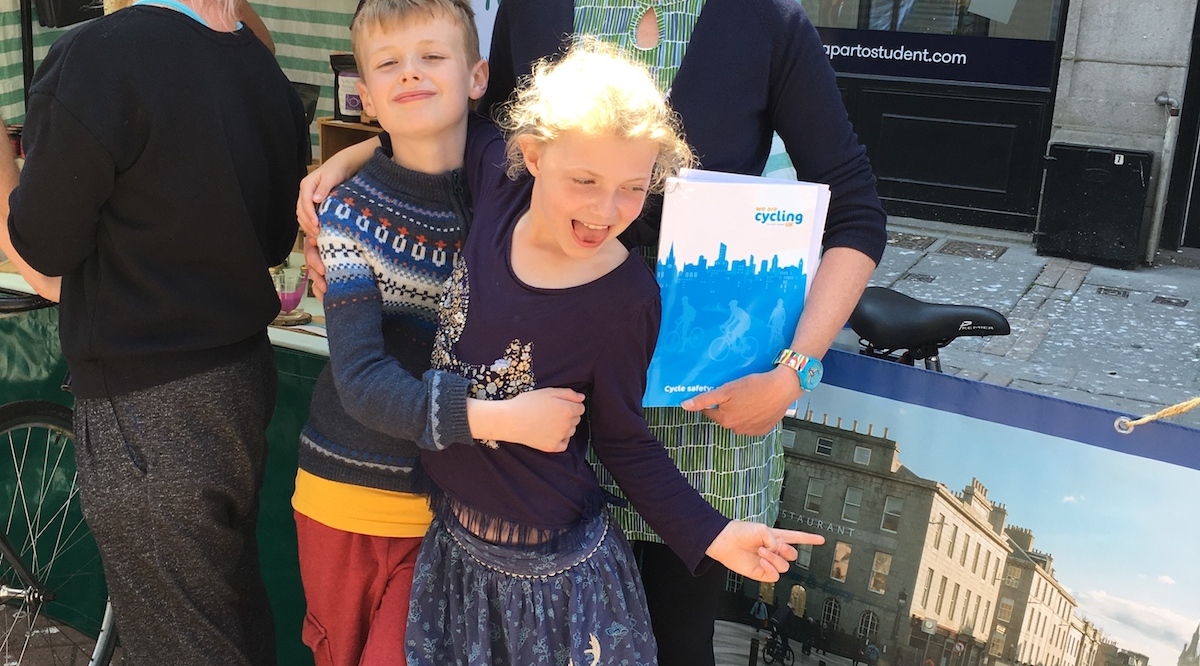 I had a great day at the Sustainability Festival in Aberdeen yesterday. I was there with Hoss, my new e-cargo-trike, and lots of literature from Cycling UK. The very lovely Fiona from Cycling UK also came to lend a hand.

I was amazed by how many people had not heard about the campaign for a bike path on Union St. With all the social media sharing and the protest and multiple articles in newspapers and on radio, I assumed everyone would have heard of it by now. But many people were hearing of it for the first time and as always, excited by it. One lady on a mobility scooter came and talked to me and she also supports it because these segregated paths can be used by mobility scooters as well.

The postcards we handed out are all addressed to the city council and are an easy way for people to let politicians know they support this. I’ve since ordered another hundred and will continue doing so until we have a bike path on Union St.

Several people asked me for the address of my site but although I have a blog, it’s not solely about the campaign. I repeatedly told people I’m just a mum who wants safe space for my children to ride their bikes. Today I decided to create a page for the campaign on the Sustainable Aberdeen site – A cycle path for Union Street. At the bottom of the page is a form which people can submit. It goes straight to the transport strategy team at Aberdeen City Council.

I heard from several frustrated members of the public who have been campaigning for cycling infrastructure in Aberdeen for many years now. One fellow has been doing it for 20+ years and still the city has nothing to show for it. Not even one metre of segregated bike path. Time and time again the city council re-develop roads and pavements but do not include provision for cycling which is the most cost-effective time to do it. They’re about to open a new ring road around the city but cyclists are banned from it. They have plans to widen the pavement and narrow the carriageway in Schoolhill but again, there’s no provision for cycling. Someone told me that they tried to get the council to incorporate a cycle path on Market Street when that was developed along with Union Square (this is before my time here but still in the last decade) and they didn’t do it. Market Street is now one of the most dangerous roads for cyclists. It’s not just cycling that is completely ignored. Pedestrians also get a rough time here. I contacted the city council in 2015 about a treacherous junction that’s very hard to cross as a pedestrian. It’s the bridge next to the Wellington Suspension Bridge, the A956, and you have to dash across four lanes of traffic. They said in 2015 that it’s on their to do list. Nothing has happened so I emailed them again a couple of weeks ago. It’s still on their to do list.

The car is king here and Aberdeen City Council is doing everything it possibly can to keep people driving their cars. This is tragic on so many levels. A recent study has found a link between pollution from cars and diabetes. Also in the news this week is an article from Mike Kelly, a visiting fellow in the the Department of Public Health at the University of Cambridge, who says the message about exercise is just not getting through. We need to be encouraging active travel in our cities and towns. The transport sector accounts for 24% of the UK’s greenhouse gas emissions. The benefits of cycling are so far-reaching that we are stupid to ignore them. But that’s exactly what we’re doing in Aberdeen.