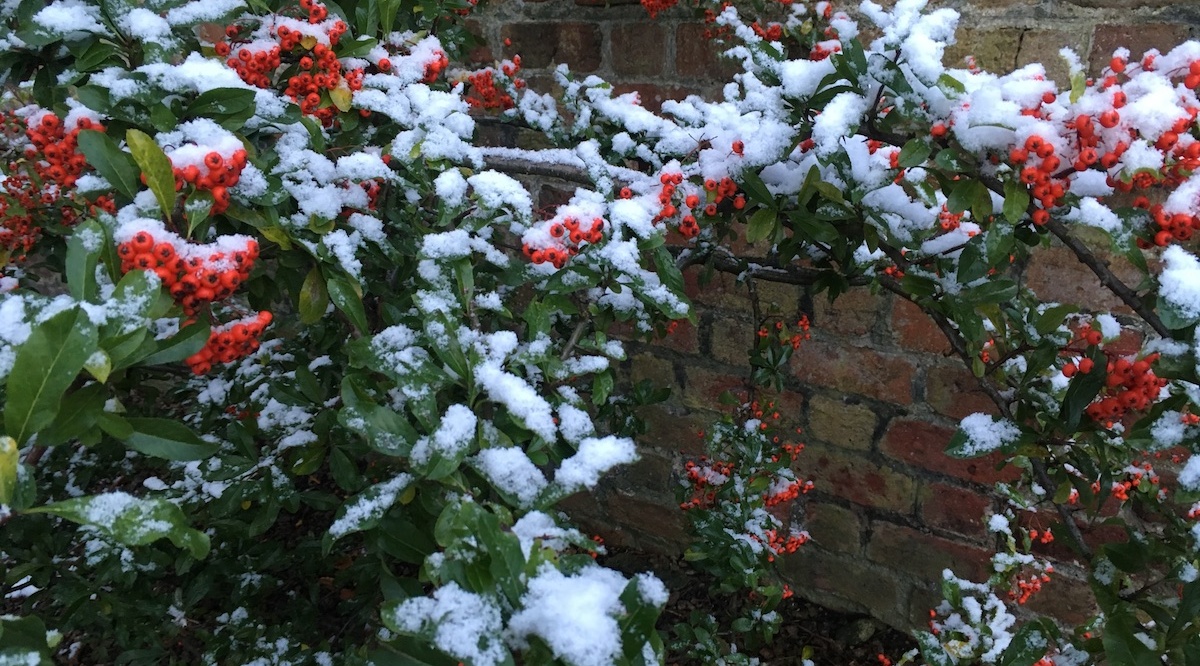 I’ve haven’t written much lately because I’ve been busy. Everyone is busy, I know. All the snow has melted here but it hung around for a long time. Usually when we get snow it’s all gone within a couple of days. The chances of a white Christmas now are very remote. It looks like we’ll have a top of 6°C on Monday.

In the news a couple of days ago was this:

Our war on wildlife: now birds are not allowed in trees…?! Pigeon spikes spotted in Clifton, Bristol above a car park. Has anyone seen this before? How is it allowed?!
📷: thanks to Anna Francis pic.twitter.com/NuG9WvYBMj

The Guardian wins for the best headline with Critics pooh-pooh use of spikes in trees to protect cars from birds. I think it is pretty mean to prevent birds from sitting on branches in trees. It’s one thing to put spikes on buildings which we have constructed but trees are their home. I’m also not very sympathetic to the plight of car owners. We don’t own a car and I despise them more and more as I get older. Every morning I walk to school to the smell of poisonous fumes and the stressful sound of the internal combustion engine. It’s not pleasant at all. Roads take up much of the streetscape in our cities and both sides of most streets around here are full of the parked monstrosities. Not to mention the impact on our health. Cars are one of humanity’s worst inventions. And now we’re punishing birds for doing what they do: sitting in trees. I suppose it might have been worse; the car owner could have just felled the tree.

A friend asked me this week how, as an atheist, I explain Christmas to my children. It’s not hard really. Christmas predates Christianity. Previously it was a celebration of the winter solstice and a return to longer days. Jesus was not born on the 25th December but the winter solstice is very close on December 21st. It was not until the 4th century AD that the Christian church adopted the holiday as one of their own but pagans were celebrating it long before this time. Apparently the Christmas tree was stolen from the Germans in the 17th Century and gift-giving was a Victorian invention. There’s not really anything Christian about it at all. You also don’t have to be a Christian to donate to charity or to be kind to other humans and the planet. We heathens donated £125 to the Schistosomiasis Control Initiative last week which will ensure 469 children are protected against the life destroying effects of schistosomiasis and intestinal worms for a year.

An atheist doesn’t need a God to tell them what’s right and wrong. As history has shown us people will use God as an excuse for all manner of despicable things. I think it’s better to follow reason and logic which is universal and doesn’t require belief in the supernatural. That said, it’s not always easy to judge what is right and wrong and moral philosophers have been debating this for centuries. The world lost one of the most important moral philosophers of the last two hundred years in January this year. His name was Derek Parfitt. Here’s what he says matters most in his book, On What Matters:

.. we rich people give up some of our luxuries, ceasing to overheat the Earth’s atmosphere, and taking care of this planet in other ways, so that it continues to support intelligent life.

12 Replies to “Be kind to living things”