I nearly didn’t take Daniel to his swimming class today and deliberated about it right up until the last moment. What if there’s an earthquake while we’re there? The changing rooms are tiny cubicles surrounded by ceiling-high besser block walls and it’s easy to feel vulnerable when you’re naked and it’s freezing outside. But I braved it and there was no earthquake to send the ceiling crashing into the pool hurling Daniel against the side and generating a tsunami to rip Elizabeth from my arms and carry her away. Phew.

A friend of mine told me this morning that at her swimming lesson, the teacher began by explaining the earthquake drill. This consisted of pointing out the safest place: the middle of the pool so as to avoid being hurled against the concrete walls on the side. As well she made sure everyone kept their clothing bag nearby rather than in the lockers provided so that should evacuation be necessary, they wouldn’t all freeze to death in the cold outside. I think she found it hard to enjoy the lesson after that.

As I was driving home, I drove along Durham St North (a street in our suburb) past some modern townhouses. This three-storey block has been reduced to two. The bottom level crushed underneath: 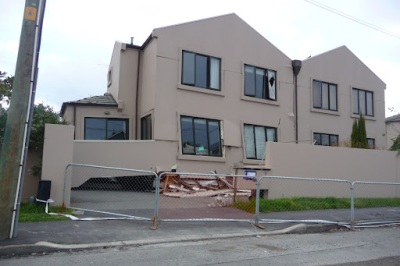 On the GNS website there’s a page explaining what a major earthquake in Wellington will look like. It provides some reassurance: “Fortunately, New Zealand has a state-of-the-practice and strongly enforced building code that makes our structures well designed to cope with earthquake shaking.” Yeah, right.