This past week I have felt very frustrated with the Aberdeen City Council after I read about their plans to spend £5.5 million adding another lane for private motor vehicles to a road in central Aberdeen. A bike path has not been included in these plans and the road in question is uninviting for pedestrians and dangerous for cyclists.

If you live in Aberdeen I urge you to write to your local member at the city council and also the transport spokesperson, Sandra Macdonald. Contact details for your local member can be found here. My letter is below. Feel free to copy as much of it as you like.

I wish to express my sincere objections to the plan to add an additional lane for private motor vehicles to South College Street, Aberdeen. For years I have been writing to the council requesting safe cycling infrastructure to allow children to cycle around Aberdeen and always I have been given the same refrain, “When the AWPR opens …“. The AWPR has been open for more than a year now and still there is no safe cycling infrastructure in the city that passes the 12-year-old test (safe enough for a 12-year-old to cycle independently). Instead the council now plans to spend more money on roads for private motor vehicles. This is inconsistent with the council’s own master plan which uses the words, “cycling city”.

The council repeatedly talks of leveraging the benefits of the AWPR and acting quickly but a year has passed and there’s no new infrastructure for cyclists or pedestrians in central Aberdeen and yet a 15-year-old plan to increase road capacity for motor vehicles is to be put to contractors.

A 15-year-old road plan is out of date. Laws have changed, environmental regulations have changed, the ill-health effects of air pollution are better understood, our understanding of traffic and transport has changed, and the problems of climate change, air pollution, and obesity have become more severe and more urgent.

South College Street is in our city centre. It is next to the train station, Union Square, the River Dee, the harbour, Duthie Park – these are all destinations for people to shop, work, and play. Putting in a multi-lane road between these destinations will create a physical barrier for people wanting to move between these places. Sustainable transport is about much more than one road in the city centre; it’s about creating a network of connections for active travel throughout the city. If you separate these destinations with dual-lane carriageways it creates an impermeable barrier for pedestrians and cyclists.

In other developed countries roads and highways are being removed. It’s urban design from the 1960s and 1970s to continue to build more infrastructure for cars. The following three images show where a motorway was built in Utrecht in the 1970s and then removed again in 2015. 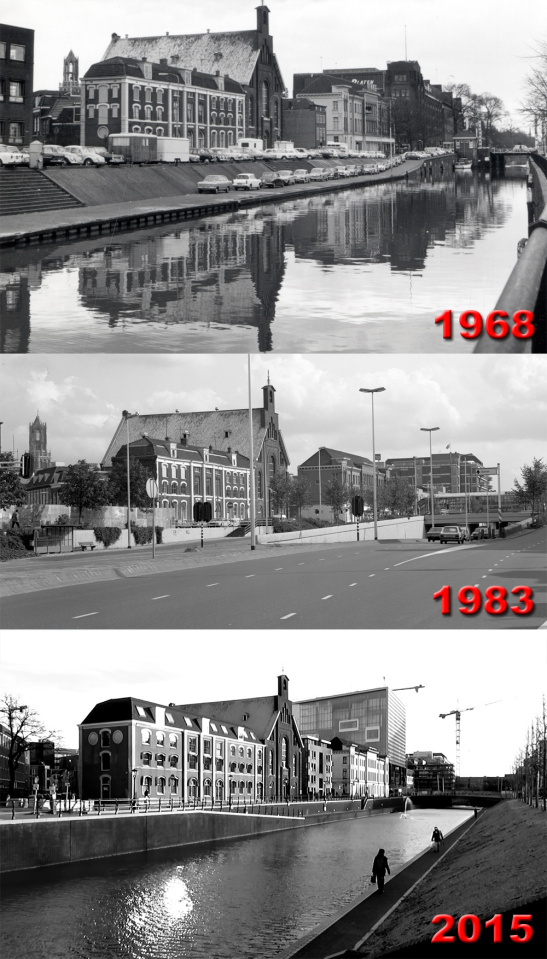 The next two photos are in Seoul, South Korea. The first is of a highway in the central city that was built in the 1960s.

This second photo is the same place in Seoul after they removed the highway in 2003.

Even in the United States, where cars are king, highways are being removed. Here’s Portland in the 1960s.

Here it is today:

Cycling infrastructure is cheap to build when compared with roads for cars and returns more to the community than it costs to build. It can also be delivered in less than 18 months, unlike large road projects which can take a decade or even more. The £5.5 million cost to add another lane for private motor vehicles would be better spent on cycling and walking infrastructure. Sevilla, in Southern Spain, put in 75 miles of segregated cycling infrastructure in just 18 months. A year has gone by since the AWPR opening and the promised start of finally delivering sustainable infrastructure but the Aberdeen City Council has so far put in 0 miles.

Why are we not building cycling infrastructure? Why are we increasing road capacity for private motor vehicles? Please reconsider this plan.

Sources of photos and other information in my letter: