Oh dear. The world really is conspiring against me. I woke this morning to the news that Boris Johnson has hired Tony Abbott as a Brexit trade advisor. This is grim news indeed. The only good thing to come out of the last Australian election was the news that Tony Abbott lost his seat in parliament.

For those who don’t know, Tony Abbott was an Australian prime minister from 2013 to 2015 when he was ousted by his party. He is a fervent climate change denier. In 2017 he gave a speech to the Global Warming Policy Foundation in London. Here’s a summary from ABC News Australia.

Climate change science, he now asserts, has the spirit of the Inquisition.

It is the “thought police down the ages” and invoked a post-Christian nostalgia for sacrifice in political response.

“Primitive people once killed goats to appease the volcano gods,” he said.

“We are more sophisticated now but are still sacrificing our industries and our living standards to the climate gods to little more effect.”

After all, he has studied photographs of Manly beach over the past 100 years and can see no evidence sea levels have risen.

But in any case, climate change is “probably doing good; or at least, more good than harm”.

One of my contacts in Australia told me this after I said that we don’t want him here:

Tony Abbott is against same sex marriage, thinks climate change is doing more good than bad, and has made some pretty misogynist comments. In 2010 he said:

“What the housewives of Australia need to understand as they do the ironing is that if they get it done commercially it’s going to go up in price and their own power bills when they switch the iron on are going to go up,” Mr Abbott said at the time.

It’s hard to find any assessment of his performance in negotiating trade deals online and I’m not qualified to do it but I did find this interesting graph. According to this report from The Reserve Bank of Australia, exports to South Korea and Japan went down *after* Abbott’s trade deal negotiation in 2014. Exports to China did go up but they were going up before the agreement anyway. If anything the rate of increase looks like it has declined. 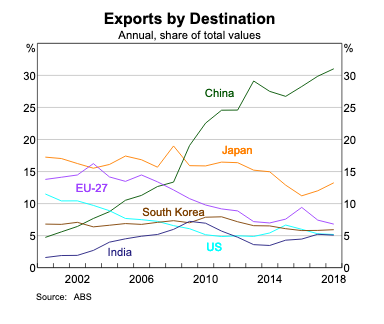 To negotiate trade deals a person needs to be clever, have diplomacy, a good understanding of the modern zeitgeist, and high emotional intelligence. Tony Abbott seems better suited to 1950s politics than 2020 and beyond and his long list of public gaffes and blunders does not engender any form of confidence in him as having emotional intelligence.